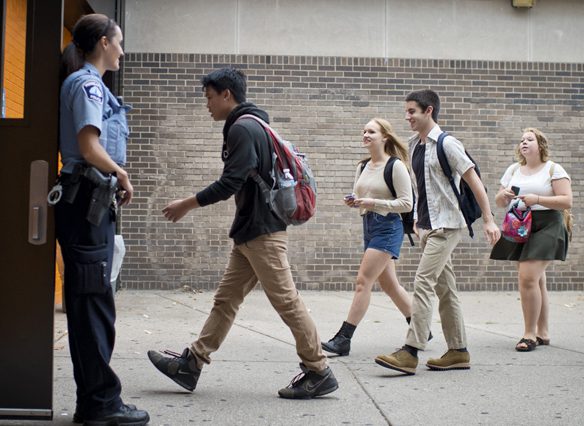 Every school night, parents and kids across America are packing backpacks for the following day at school – books, homework, notebooks, tablets, bullet-resistant panels. That’s right. Some parents have invested in bullet-resistant panels for backpacks to try and keep their kids safe at school. Gun violence and mass shootings have become a constant fear for kids, parents, teachers, and school administrators. In fact, between 2013 and 2015, 160 school shootings took place across the United States according to Everytown Research.1

The Changing Face of Violence at American Schools

Violence at schools encompasses a whole range of crimes including mass shootings, bullying, cyberbullying, hate crimes, physical harm, sexual assault, possession of firearms or explosive devices, and drug offences. According to American Institutes For Research (AIR) during the 2013 – 2014 school year, 1,501 incidents involving possession of a firearm were reported at U.S. schools.2 It’s no surprise that many parents are worried about their kids going to school if a child sitting next to their son or daughter could be carrying a gun.

The fear of firearms is not the only troubling issue at U.S. schools. From 2012 – 2013, 22% of students ages 12 to 18 were bullied at school according to The Centers for Disease Control and Prevention.3 And a staggering 64% of students being bullied don’t report it.4 Anti-bullying programs including educating kids to help prevent violence and hate crimes are being implemented at American schools, but school administrators may need to bump up security a notch to help protect the children in their care on a daily basis. It’s a tragedy that over 160,000 kids refuse to go to school each day because they’re afraid of being bullied.5

Security guards are a visible deterrent to criminals but may be a comfort to kids who might otherwise feel vulnerable. Violence in schools and on college campuses is not going away anytime soon. School officials grapple with the problem of violence in their schools every day. Professional security guards can work with teachers and school administrators to help protect students including monitoring entrances and exits, patrolling in and around the school, reporting suspicious behaviour, responding to emergencies, and following procedures during a lockdown. Some city governments have tackled the problem of school violence by covering the cost of placing security guards in non-public schools.

Bill “Intro 65” will help protect kids in non-public schools including private and religious schools. Eligible schools will be reimbursed for the costs of enlisting the services of security guards in their schools. “Every student needs a safe environment in which to learn,” said Council Member Vanessa L. Gibson, Chair of the Committee on Public Safety in a January 2016 press release from the Office of the Mayor in NYC. “As biased and nonbiased related violence rises on campuses and in classrooms around the country, it is essential we find creative solutions to maintain security in all our schools,” says Gibson.6

Keeping students safe is a challenge faced by all school officials, administrators, teachers, parents, and government. Hiring qualified and fully trained security guards is one step in the right direction to helping kids and teachers feel safer at American schools.

2American Institutes For Research, “Crime and Safety at Schools,” May 4, 2016.